There are three locations in the Lowcountry –West Ashley, Summerville, and Shipyard Park (Wando/Mount Pleasant).

According to owner, Anthony DiBernardo, COVID-19 was uncharted territory for him and his employees.

He said customers and employees handled it well in the beginning. He said they implemented safety protocols and procedures. Once Governor Henry McMaster stated no inside dining due to COVID, Swig & Swine started doing only to-go orders.

While switching to a new model to serve customers, DiBernardo discussed how the decision was made on laying off hourly employees.

“It was definitely hard,” DiBernardo said. “The overwhelming fear of the unknown was the main feeling. There was no preparation for this.”

“I had to think of a way to stay alive,” DiBernardo said. “Our first reaction was to lay off the hourly employees and run the three stores with just four salaried managers in each store — plus myself and my manager of operations.”

Within two weeks of the to-go model, he was shocked at how busy they were. However, they still were not busy enough to bring back staff, but busier than they anticipated.

At the end of the second week of that model, he looked at the numbers. He realized he could make payroll for everyone in the building, pay rent and he wanted to help those he laid off. 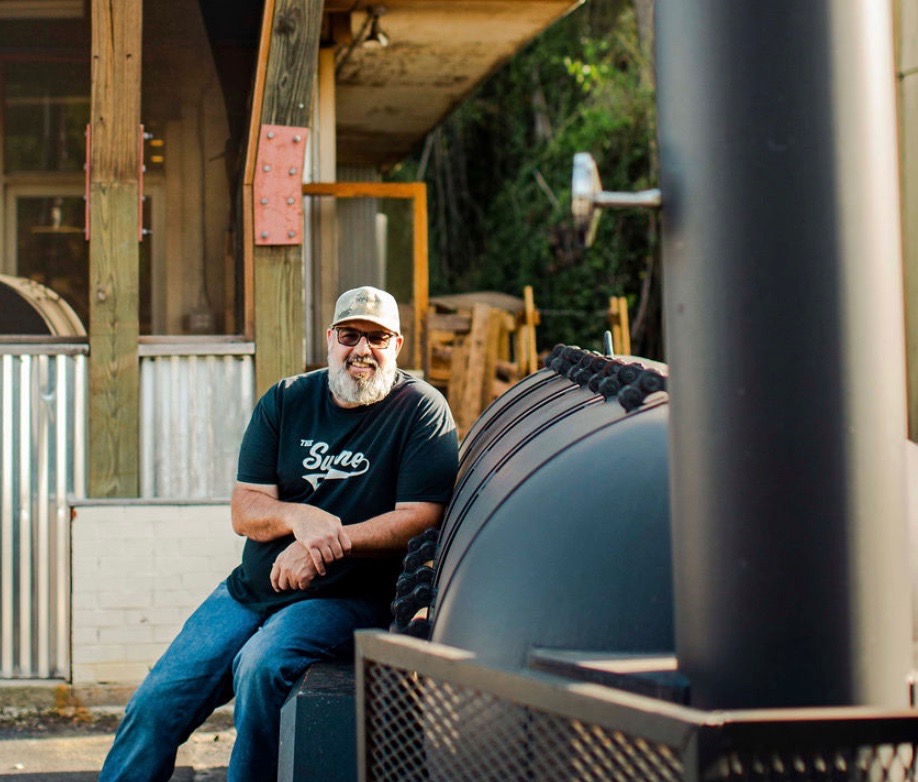 DiBernardo gave gift cards to his laid off employees to alleviate their financial concerns.

“I figured the gift card idea,” DiBernardo said.  “I chose Harris Teeter because it has the pharmacy if anyone needed prescriptions and covers groceries,” he said. “I looked at the budget for each store, I figured I was able to purchase $5,000 worth of gift cards a week.”

From there, they did it continuously. He said he knew he could put the money in the bank and protect the business for whatever outcome happened because of COVID, but he rather help his employees.

His efforts were seen by a well-known barbeque brand.

Charcoal brand, Kingsford, saw what Swig & Swine was doing for their employees. Kingsford had money set aside to help barbeque businesses across the country during COVID. They paid attention to Swig & Swine’s giving of gift cards and sent the restaurant a check of $10,000 to buy gift cards to help their team members.

“We were able to extend the giving of the gift cards for two more weeks — thanks to Kingsford,” he said.

He said Swig & Swine has always been community oriented, but he had to think about his team.

“At the end of the day, once we open back up, I’m going to need my team [I laid off]. I knew I need to find a way to help them anyway I can. We continued to do this until we brought employees back.

By April they were able to have everyone back.

The to-go traffic was getting so busy, he had to bring some of his kitchen team back. Plus, front-of-the-house workers manned the phones to handle the business.

DiBernardo said Swig & Swine has always been about value, but he said this option was created because he knew a lot of people were hurting financially. They wanted to put together packages to feed a family of four.

It allows the customer to choose a meat and two quarts of sides and buns.

“I wanted to do it for under $10/ person so that you are receiving a value,” DiBernardo said.

He said when he looked at the overhead at the restaurant, it wasn’t what it normally was because everybody was laid off. He could afford to do the four pack and it would still help the community.

“I heard a message a long time ago, it is ingrained in what we do every day,” DiBernardo said. “That is, ‘Everybody has a gift. It is what you do with that gift that determines the outcome.’ Our gift is cooking and we can cook for thousands. Even through a family four pack, that is our gift. We are using our gift for a higher purpose, other than for profit. We want to give them a break during uncertain times.”

Once allowed for 50% occupancy inside the restaurant, their service hours became 11 a.m. to 9 p.m. seven days a week.

Like restaurants across the state, Swig & Swine has seen the cost of goods go up since COVID.

“Everything went up,” he said. “Meat, all disposables went up because production all over the country stopped because of COVID. All these items became a demand. All of our costs associated with food went up – maybe two to three weeks of the shutdown.”

He said needed items like this affects the bottom line. Bottom line is profit after all expenses are deducted from revenues.

Many restaurants over the country have implemented a surcharge to handle this.

As far as a surcharge being added to the cost of meals at Swig & Swine, DiBernardo said he went so long without it, he sees no need to implement one.

“The way I am looking at it, everybody is affected by price increases during this time,” he said.

Swig & Swine plans to alleviate your need to cook around Christmastime. After Thanksgiving, you will be able to order from their Christmas menu. It will have different smoked meats, sides and desserts.

Katrina Wilson is a Carolina girl adjusting to Northern Virginia’s world. You can follow her on Twitter at KatrinaMWilson_.

This was edited by Catrina Francis.

Need to find an article?